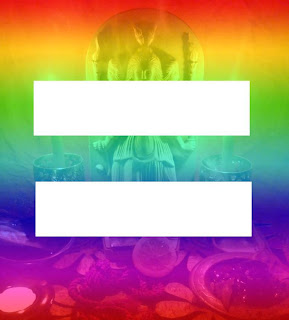 Those who know me in the mundane world, know that I am very pro-lesbian-gay-bisexual-transsexual-transgender (phew! that was a lot to type). Though I am a monogamous person in a heterosexual relationship, I have considered myself bi-sexual in the past. I love beautiful people and beauty transcends sexual identity. Beauty is something that really comes from the inside.  I admire and adore those people who have an androgynous quality to them. My definition of androgynous is a person who has both masculine and feminine characteristics in a paradoxical manner. In my perspective, they are aesthetically balanced and a perfect embodiment of Yin/Yang. The fashion industry also prizes this quality through their use of androgynous models in Haute Couture, but not commercial/catalog modeling: 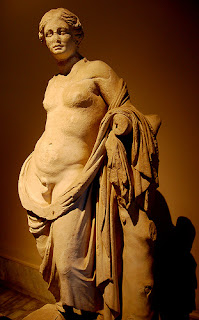 I believe that the lack of acceptance to homosexuality and bisexuality has to do with the male-centrism of Christianity, particularly fundamental Christianity. Homosexuality and bisexuality were  considered normal in ancient Greek and Roman cultures, which was reflected in their spirituality and perspective of their deities, specifically Hermaphroditus. the two-sexed son of Aphrodite and Hermes (incidentally, a revered fashion company and icon).

Hermaphroditus' lore also appears to be linked to the institution of marriage, in that, a marriage is a union of both masculine and feminine. Hermaphroditus symbolized the embodiment of both masculine and feminine. But what, Dear Readers, are the definitions of masculinity and femininity? Is it defined by our sexual organs? Is it defined by the way we have sex and procreate? Technically, as humans, we define our male-ness and female-ness according to whether we have a cock or a pussy, but should we limit ourselves to strictly these definitions as hermetic practitioners? I believe that once we become sensitive and nurturing to both our inner masculinity and femininity, we begin to grow and transform. Our Path becomes a sort of procreation.

So what, Dear Readers, does this have to do with the institution of marriage? I think we should take a closer look at Hermaphroditus, the Patron of Marriage. I think that once we can be loving and accepting of both our masculinity and femininity, we also can take the leap into the notion that marriage, a sacred union of Love and Devotion, is not limited to just our sexual organs. Sacred unions, in the highest of forms, become alchemical unions: 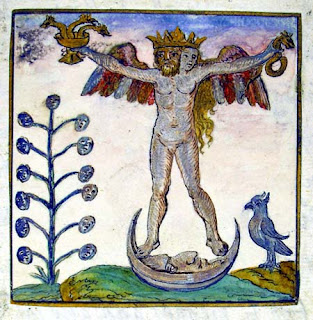 So My Dear Readers know, I will not use this blog, as a venue for politics but the inspiration was timely with current events and a recent post by Matthew. I did come up with the following prayer that I posted to Facebook as a direct result of the recent controversy:

Thou Beautiful Man effeminate. O lovely Hermaphroditus;
Transformed by the lustful Water Nymph, Salmacis, in her Pool in the woods of Caria;
Holy two-sexed son of Aphrodite and Hermes;
Patron of marriage, the sacred union of two people;
Grant us your blessings of luck and protection for all brides and grooms; and
Lead us into a realm of acceptance and belief in Love.

My inspiration came by ways of a visit from a close family member. I love that boy. I babysat him, fed him, diapered him and played with him when he was a babe. His mother was an addict who was taking some strong street drugs when he was born. At inception, the child already had some issues to work through.  He was a beautiful boy, doe-eyed and strong. He was an accomplished martial artist and his mind was both sensitive and intelligent.  He struggled with his identity, spent some time trying to be a "man" by going into the military and serving overseas where he suffered from Post Traumatic Stress Disorder. He even fathered a child but since he did not grow up in an environment, whereas, the masculine/feminine was nurtured, his spirit suffered.  He also made some very bad decisions and there was a time he kept his lifestyle secret from me out of personal shame. About 15 years ago, he began the transition from male to female and came out to our family. He consulted with me first, looking for support and guidance, and I told him that I would be by his side and I would always love him. Some family members ostracized him completely and some, including myself, gave him the Love and support he needed. A notable person of support was his elderly grandmother who told him that she too always saw his struggles with his identity and still loved him, despite his change of sexuality.

He/she came back to me several weeks ago, on a day of Hermes. He/she has not gone through the complete transformation. Immediately, I thought of Hermaphroditus though the idea never came to me before when I thought about this family member. Years, the streets, abuse,  mental illness and pain have taken its toll on this young person and though he/she is nearly 10 years younger than I am, he/she looks much older than I appear. Though he/she could not express himself efficiently, I intuitively knew he/she showed up on my doorstep because I have always given him great Love. When I gave him/her one of my famous hugs, his/her body melted in my embrace and for a second, I could feel his wholeness once more. Our conversation was interrupted several times by him/her making sounds, like a Crow, and moments of discomfort was followed by an insincere full-toothed grin, almost pysczophrenic-like. It was painful for both of us and I found myself using many of my inner magickal tools so he/she could have a setting he felt both secure and nurtured.

There's no happy ending to this story, as I needed to send him/her on his/her way. I explained lovingly that my Jupiter Angel and I have gone through great trauma and could not deal with any more at this time. I did promise him/her that I would do my best to say prayers to my guides and angels so the rest of his/her journey would be happy and protected.

I think the key to this issue can be obtained from the allegory of Hermaphroditus. The sacred combination or that alchemical union within ourselves, was not obtained from the just lust or just the material plane, but with help from the Divine.
Posted by PhoenixAngel at 11:32 PM