For my new home, I decided to do a ritual to make a protective boundary. The rite involves using, a cord, campohor tablets and the Goddess Seshat.

The Goddess Seshat
Seshat, one of my matrons, is the Egyptian goddess of measurement, architecture, writing and engineering. She was a normal human. She was deified by her culture, much like the Catholics apply sainthood to various people. Seshat is known as the first female scribe. She is the consort of Thoth and the sister of Maat. I made the introductions with her by using Maat as an interface and paid Seshat the necessary offerings and respect. I like introducing myself to deities in this manner. I guess because I see my workings with the gods and goddesses as a kinda professional networking. You're more likely to access and utilize potential resources if you go through the proper channels and manners.


I have always related to her, well... because she was a scribe and a kind of engineer, like me. Her job was to lay out the foundations of the temples after big floods. The tool she used was a simple cord. in the "stretching the cord" ritual. The cord was used to insure proper alignment and precision of measurement of the temple foundations.   Seshat always worked closely with the Pharoah and she was highly trusted and respected. . Her job was also to keep detailed records of Pharoah's time on earth so IMHO, she has very Saturn-like qualities. The goddess is shown here recording on a palm stem and she has a 7 pointed star above her head:

It seems almost poignant that I am doing this ritual since during my endeavors, the biggest obstacle was water, time and Saturn and like Seshat, I am now laying down new foundations after the flood, for my new home and temple. As an aside, I think it's a good practice to see these analogies in so-called myths.

Camphor
Camphor is an interesting substance, in that, it sublimates at ambient temperature and pressure. Not many substances sublimates at ambient temperature and pressure, or about 70 degrees Fahrenheit (or the range from 68 to 77) and 14.7 psi (atmospheric pressure).  I felt this was a good means to provide both a purification and consecration because my neighbors and landlord would probably not appreciate a dousing of water and burning of incense at the cornerstones of my home.... Besides, I do have to keep these thing discrete and the camphor provides an extra dose of protection. 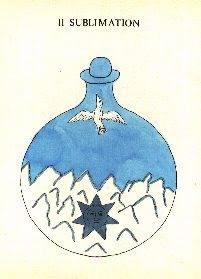 The Cord
Seshat would utilize a "cord" or string to establish the boundaries of temple after the flood.  After some thought, I figured out why she used a single cord. Seshat was determining the diameter of a circle, which she could then affix the sacred and physical boundaries of the temple circle or the base of a pyramid. The circumference of a circle can be easily found with the following equation: This gave me a convenient and practical method to determine where I needed to set my boundaries astrally and physically within the odd shaped of the property I live in. I feel it will also provide some extra "oomph" as far as the sacred geometry because it not only utilizes and ancient practice of mathematics, but also utilizes the sacred universal number of "Pi"

I still need to work out some other things, which I will post here... but I think I have a really great basis for a nice ritual.

QED
Posted by PhoenixAngel at 5:48 PM