I mentioned in one of my previous post that I attended a hand fasted officiated by a totally uber Rock Star Holy Man, a man who is loved worldwide. I have met him several times before but never had the opportunity to talk to him. To be quite frank, I was and still am very star struck by him. His energy is incredible and the Love that emanates from him touches everyone in the room. I have to admit, sometimes I am a little Leo conceited and although I feel Love for many, many people, there are few people who impress me instantly. He earned my Love, without even saying a word.

We stayed several nights at the Lodge where the hand fasting occurred and I had several opportunities to see him in a variety of situations. Our first real discussion occurred on a swing under the branches of a very large pine tree. His long legs pushed us on the swing whilst my shorter legs dangled above the ground like a little child. It set the tone for the child-like and awe-struck feelings the man gave me during the rest of our stay. He give me the sense of total trust, a feeling I typically do not allow myself. I asked him about his Life and his health and he shared with me like we were old friends. Since I was sure he has had the opportunity to see many wonderful places, on a whim, I asked him what was the most beautiful places he's ever been. He told me it was at the fork of two rivers in Germany with high cliffs, wine grapes and castles. In the waters, swans drift in the water, so large that he described them as "swan boats". We both agreed that the land he described was totally fairy tale-like. In my mind's eye, the magickal visualization of his fairy tale place filled my mind and my heart like honey and bergamot tea. I have hopeful intentions that I will be able to visit the place. Maybe for my next visit to Europe. He gave me Friendship and we shared Beauty.

Later that night, I was able to experience an impromptu jam session performed by him and a very talented virtuoso young violinist. The session lasted til 1AM. Not too many people know that my first Love was music. The waves of beauty and inspiration that filled the air struck me right to my very core for every strum on his guitar or bow on the young man's violin. Yes, some notes were flubbed, but not all. As they played the notes seem to dance above my head, like little ballerinas, floating in the clouds doing series of little pirouettes and entrechats. I tried to keep my eyes closed so I can experience the true beauty of the music dancing in my head. At one point during my reverie I was visited by my beloved father. Although its been 25 years since his passing, I felt his presence as strongly as if he was physically there. My dad's presence seemed to be intensified by the Holy Man's essence, sorta like a multi-pointed quartz crystal or a vitreous shard of moldavite. My dad motioned to the Holy Man with his lips (his lips were usually somberly pursed) and gave me his approval and blessing, something he has only given to two other people in my Life, besides my children. He gave me Joy and Inspiration.

We spoke several more times, one on one over the course of our stay and for several hours at a time. He told me secrets that I will keep locked in my heart. I was able to share with him about some dilemmas I have been having on my Path. He listened quietly and intently and gave me some much needed advice. I will not share the specifics of his advice, that's my mystery, except for one:

You are your own Universe

We shared a tear after his series of advice. I knew in my heart he could relate to my struggles. That's why I asked him in the first place. I am a very cynical person and for the most part I HAVE been pretty successful with my Life, I don't take advice from people who have lived life in an armchair and remote control fashion and/or cannot relate to my issues. He gave me Comfort, Respect, Understanding and Hope.

THANKS LON, FROM THE BOTTOM OF MY HEART! I Love you, man!!! You definitely revitalized this lil' fiery magician (sob) 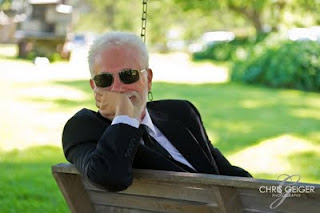 POST-SCRIPT: This is the tree we sat under during our first conversation. There was another great photo of him wearing a silly top hap with a big shit-eating grin (giggle) on his face but I didnt include it here. I wanted to include a location I discussed here in the blog. (smile)
Posted by PhoenixAngel at 6:39 PM

He is an awesome person, isn't he? We had him out to speak at our gathering one year, and he's a fascinating and good humored guy. I'm happy to call him Brother (Masonically).