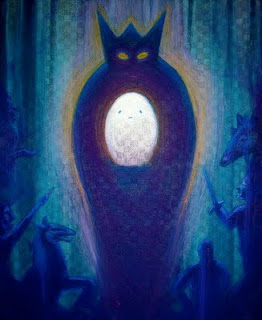 Okay, this is a little deviation from all of the serious stuff. Here's a collection of tongue in cheek terminology for what I call the Occult Urban Science Dictionary. The meaning of the phrase follows the term.

Book of the LOL: a liturgy done by pagan cat enthusiasts or kittehs to teh hoomins

Circumundulation: The process of walking around an altar with the additional movement of the ala-1980s version of "Walk Like An Egyptian".

Charscar: The resulting discolored callous from holding too many charcoals too long with your fingers

Dismember: When a zombie magician forgets a part of a rite.

Eggy, The Egregore: The name of a group or collective mind whose form is that of an egg held by Batman. Eggy is a representation of the Ovuniverse.

Enumliteration: A ritual magick language resulting from an offshoot group of thelemite computer programmers, in which the entire liturgy is done in numbers alone. Instead of the unicursal hexagram, the group will use the greek letter sigma, which mathematically implies "summation".

Iridescence: Seeing different colors of within an object at different angles. Description of certain magickal folk who have multiple identities or magickal names, e.g. their given name, their facebook magickal name, their blogger or follower identity, their online discussion group name, their magickal motto name and the name haters call them, AKA magickal multiple personality disorder or MMPD.

Irrational Number A number that does not terminate, such as Pi. The amount of email or calls it takes to contact your mentor or fellow frater/soror who appears to have dropped off the face of the earth.

Nonsense: The resulting incense that has little smell or smells absolutely putrid, AKA manifestation incense

Potter-Pantheon: The resulting group of deities that will be developed in another 100,000 years after archaeologists dig up JK Rowlings tomb. The holy trinity for this pantheon will, of course, be Harry Potter, Hermione Granger and Ron Weasley.

Tell Me How That Works For You: Are you fucking kidding me? That's insane. Your life is soon to blow up in a brilliant flash!

Thixotropic: a gel-like substance with the consistency of maple syrup. This term can be used to describe certain young magical folk who are uber-enthusiastic, fluffy bunny like and generally annoying as hell.

Yodaism: The resulting religion that will be developed after George Lucas' tomb is discovered by archaeologists in 100,000 years

If you have more, feel free to comment and I will add it!!!
Posted by PhoenixAngel at 8:58 PM

Of course, I've also been tempted to passive-aggressively mock them on forum posts by beginning and ending my replies to them using nonsensical, randomly-chosen numbers (ex. 14, 62, 115.287456, etc...)

Seanescence: The process in aging magicians who spontaneously to speak to the dead as if they are in the next room; or, the period near the end of an magician's life cycle in which they spend most of their time sitting down (from the French word for "seat") accompanied by the shedding of hair.

COSHH (the Cult of Safe Handling of Hecate). The COSHH regulators impose a number of obligations on priestesses; the object of the regulators is to promote safe worship with potentially hazardous deities.