Light to Dark/ An Ode to Persephone

A Light with No End
When I do my daily LBRPs, I have always had a slight visualization problem with the Archangel Michael. The fire I visualized with the archangel was always like a flame thrower or a furnace with no afterburner. I realized that my visualization was a slight overkill so I tried to back it off a bit. I started to visualize it as a laser with pin-point precision AND accuracy...but even THAT was difficult. 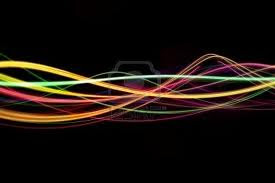 Over and over, the line of the laser would turn to a wave. A wave of Light with no end.
Morality Differentiates Between Light and Dark
In the last post I inserted this diagram in regards to morality and spirituality:

I am beginning to understand that morality and spirituality are very separate waveforms, not combined into one waveform. For a long time, I tried to convince myself that the two were the same, which has caused much inner turmoil and frustration. Although I understood both concepts of combination and separation superficially, that is, I probably could have regurgitated something to support either one, the concept really did not click in my head. I guess I really wanted to believe they were combined. This was a fallacy.

Love is Light and Darkness. Love Does Not End
A critical key to my understanding was going back to Jung and realizing that morality is just a deception:

Being a part, man cannot grasp the whole. He is at its mercy. He may assent to it, or rebel against it; but he is always caught up by it and enclosed within it. He is dependent upon it and sustained by it. Love is his light and his darkness, whose end he cannot see. “Love ceases not”—whether he speaks with the tongues of angels,” or with scientific exactitude traces the life of the cell down to its uttermost source. Man can try to name love, showering upon it all the names at his command, and still he will involve himself in endless self-deceptions. If he possesses a grain of wisdom, he will lay down his arms and name the unknown by the more unknown, ignotum per ignotius—that is, by the name of God. This is a confession of his subjection, his imperfection, and his dependence; but at the same time a testimony to his freedom to choose between truth and error. -Carl Gustav Jung

An Ode Persephone
This last weekend I did a solitary equinox. I have been struggling with the meaning of the autumnal equinox, in particular an equinox rite performed in a solitary manner. For those of My Dear Readers who have known me a while, you know that one of my patrons is Persephone. Sadly, since I been working with other deities, I set her aside. From the very beginning, I could relate to her and my own life's struggles mimicked the goddess. From her story, I was able to ascribe both light and darkness to both the deity and myself in a relatable way. Two very special people told me the story of Persephone two years ago. I was so touched by the hope and inspiration of the story that I gifted the couple back with a pomegranate tree, which has been lovingly cared for and bears fruit now. This whole process of understanding morality, spirituality, light and darkness has provided even more meaning to Persephone and the meaning of the equinox. I nearly forgot. It has been like an awakening. 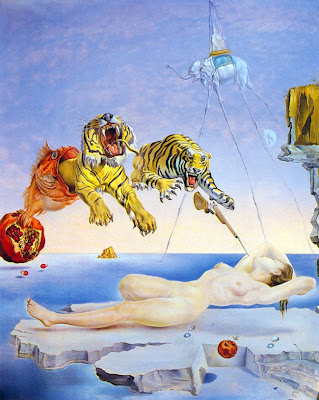 Dream Caused By The Flight of A Bee Around A Pomegranate A Second Before Awakening - Salvador Dali
Posted by PhoenixAngel at 12:38 PM