Only Talking About Magick? 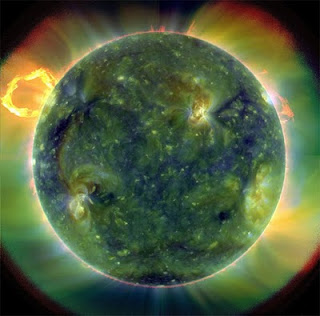 Why do we do magick? What does it take to be a powerful witch, magician or sorcerer?
Control over our lives and our inner demons? Unity with the divine? Power? Love and Light?

The image to the left is a NASA photo of the Sun.

I don't know the exact answer, A couple of years ago, one of my foremost answers to to the question would have been, "an ability to change things I have no control over". Recently, I just came to a vital epiphany that has changed my perspective. I had been thinking about this, primarily because I had to sort out in my mind what was a mere "teacher", as opposed to a "mentor". A mentor is someone who actually DOES magick and a teacher is someone who can only TALK about magick. For example, a mentor is a person who has personal experience with the meaning of each of the 72 tarot cards and can inspire people to find their own meaning, rather than performing smoke and mirror tricks about the facade of the visages.

The image above is a skeptics interpretation of the paranormal

I began to actually look for a pattern in people I consider to be highly magickal and therefore potential mentors, which has changed my definition of magick...

Magick is the manifestation of blessings through change and magick is not independent of conflict. Conflict, in and of itself, is change.

I found that highly magickal people have a combination, not all necessarily ALL, of several of the following positive attitibutes:

A realistic image of self
An earned level of respect among their peers both in and outside magick
Loving family members: parents, children and/or siblings
A significant other that Loves and Cherishes them
A job that they enjoy (or seeking a job through education)
Loving friends both in and outside magick
A skill in the arts or a craft
Intelligence and/or sensitivity
An ability to speak about and discuss many different topics
A healthy body or recovery from a major illness
A Love for beauty
An ability to laugh AND to make others laugh
Great stories about where they have been and/or what they have done

They understand what it is to be a complete and utter dick.
They have made several mistakes in their magickal career that they have learned from.
They do not have a trail of hurt people in their Path because they understand abuse.
They understand and can deal with conflict in a positive manner.
They know about self-sacrifice. 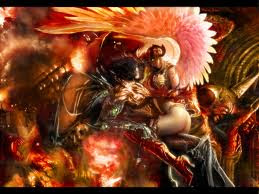 Finally, true magical people are sincere and genuine. They will tell you when things are fucked up in a kind (sometimes sarcastic) way, even when they really do not want to.

Posted by PhoenixAngel at 11:49 AM