This weekend I had the opportunity to go to the Central Valley Pagan Pride Day (CVPP) in Fresno, California. If you look up the Central Valley in Wikipedia, it's the region that includes the San Joaquin Valley and the Sacramento Valley, an area of about 280 miles by 100 miles. It's an area rich with resources, oil and agriculture. It's also an area that has been hit hard by the economy. The counties within the Central Valley have some of the highest unemployment. The culture is further impacted by pollution and poverty. It's difficult to provide for ourselves and our families, not to mention a community. Other people's needs tend to tall fall on the wayside when we can barely support ourselves. To feel a sense of community over an area that is greater than several states is very significant. I applaud the organizers of the event for their success on this effort. 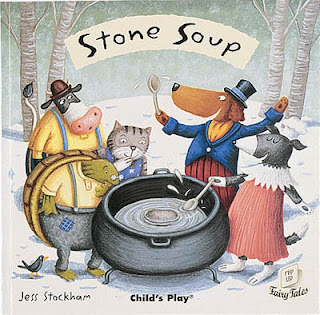 The most significant concept of the workshop was the following idea:

Conflict is natural. We can grow from conflict. Conflict is best dealt with by developing a sense of community.

This is a very important idea for me, especially in the general pagan community and specifically in the sense of a initiatory experience. I have a Stone Soup perspective on community, in that, during rough times we should all contribute our individual, yet unique, resources to the pot for our nourishment. A community that doesn't encourage this contribution tends to lack the vital nutrients from having many different ingredients. This need is really important now that the pagan community is beginning to take off from grass roots "circles" to larger, more diverse "organizations". We're GAINING reputability. The best and easiest way to develop this sense of community, like the fable of Stone Soup, tends to be through the sharing of food and drink. Other means include the unification through the arts: dancing, music and visual expression, which also are the components of a successful Pagan Pride Day. All pagans at CVPP were allowed to express themselves positively in a supportive manner: Ecletics, Wiccans, Druids, Asatru and Ceremonial Magicians. We need this expression and unification in a community. In one of my groups, the unification is simply through the manner of dress, similarity in alcohol and tobacco. It doesn't have to be overly developed concept.

I think that pagan group ritualists already have a jump on a sense of community but oftentimes, the rite is overlooked as a means for developing both personal and group growth. In a rite, we have to work together or the rite does not work. The keys for growth are both communication and tolerance. Another overlooked trait is consistency, which I will not address in this post.

After a long Saturday, I spent a couple hours with WitchDoctor Joe's group in Visalia. During circle, each person has a chance to tell everyone a little about themselves, e.g. their path and the favorite color. A blind woman tied the idea of the whole weekend together for me in a single phrase:

"My favorite color is the color of tolerance"


It was truly enjoyable to taste the Central Valley Pagan Pride Day Stone Soup
Posted by PhoenixAngel at 9:24 PM

We have the same taste in soup!