Sin of Restriction is Like A Crown of Thorns

My Dear Readers have probably wondered why I have not blogged as frequently as I used to. Though I love blogging, I have been very busy. I have a whole new set of things to explore in Life and I am thankful. It's a lil scary, only because it's different but I remain ever mindful that stars shine their brightest in the dark. I have one very profound thing to say about this last four months.

Love is about empowerment. Anything else is not really love.

When I was growing up, one of things that used to get on my nerves were the visual forms of Jesus. Jesus was usually some beautiful white guy with with light-coloured  hair. This nerve was further struck by the notion that my ethnicity looks upon darker skinned individuals as lesser beings. I come from a stock, whereas, our skin color ranges from very light to very dark, depending upon the amount of inherited aboriginal blood. (My parents' country was one of those conquered ones) I am a dark-skinned individual. (Think Sookie, or Paris Hilton without the Oompa Loompa orange) As a very young girl, I realized that I could never attain that standard, no matter how hard I tried and no matter how good I was. I am not a white guy, like Jesus. Something happened to me as a little girl when I realized I can never attain that type beauty, I began to seek the true meaning of what is "beautiful" and therefore Divine. Although I now realize there is a difference between inner beauty and outer beauty, in my defense, I was thinking about these ideas as a girl of 8 or 9 years old. 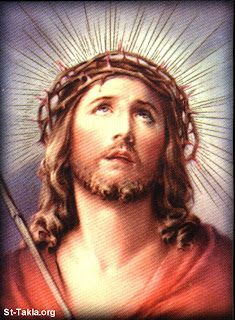 What I found is that humans tend to portray their deity according to how they relate to them. It's cultural and a reflection of their environment. I guess that's why I find polytheism so attractive. I do not have to associate "beauty" and therefore Divine, to just one type of face and therefore I can actively become Divine myself. I am not bound to one image or concept.

My longtime Dear Readers have known about my issues with the triple goddess. I have problems with the idea because I cannot relate to it in almost the same way I could not accept the divine images in Christianity. Even though the deity has a woman's face, she still reminded me of the triplicity of the Father, the Son and the Holy Ghost. 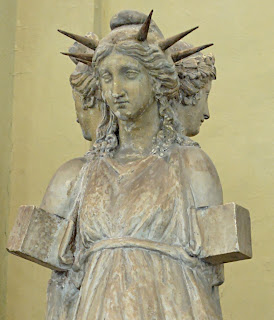 I guess I finally reached an understanding of the whole thing when I was doing some personal Work. I actively look at the darker or shadow side of notions so I can find a more balanced perspective. It's that whole idea that "the stars shine their brightest in the dark". I have actively had to defend my type of framing because some pagans view it as negativity.

Two other things helped me resolve my difficulties with the triple deity notion.

I was visiting with my Beloved Frater and on his altar he has a picture of Jesus. Though he is a pagan like me, I asked him why he put the picture there. He told me that it was because he thought that Jesus was a good representation of Tiphareth and I was reminded of of the phrase "Christ Consciousness". Images of the Sun and glorious beams of Light began to form in my minds eye when he said it and I finally started to resolve within my heart, and not just in a cognitive sense, the concept of beauty within Christianity. It was quite an epiphany because in my heart, I still attribute my values of prayer and devotion to my Catholic upbringing. If anyone doubts that power, I challenge anyone to go to a Catholic church when the little old ladies are saying their rosary if a little one is sick. Those lil grandmas have a phone line to God.

The Divine, like Love, is about empowerment.
Posted by PhoenixAngel at 10:05 PM

I also use Catholic images on my alter to represent concepts as you describe, such as Tiphareth... and Jesus representing Tiphareth is excellent! I also work with Catholic Saints on occasion. The Triple Goddess has recently been a central figure in my work due to my own shift in life. Powerful to work with right now, I'll say that.

I not only enjoy how you've reconciled things, but mostly I enjoy your final statement; "The Divine is about empowerment."

RO said it well. i suspect many of us formerly orthodox Christians have to go through a period of setting aside all our restrictions and scrupulosities in order to understand the real message. i'm still working on that...

i know it's been a while since i've commented, but i'm still reading. Keep it up! and the math post was good stuff :)