Last week, on the same day of my personal tragedy, two of our four dogs escaped. One was a mama dog I nicknamed "Anubis" and her puppy that I nicknamed "Balance". (Both dogs have different names given to them by my children.) I named the puppy Balance because he reminded me of a Golden Dawn nemyss and he was born under my son's bed about the same time I began my work with the goddess of truth and balance. (My son had adopted the stray mama dog and we weren't aware that she was already pregnant)

From the beginning the dog was a challenge, just like achieving Balance. He was the runt of the litter but he was always the meanest. He used to beat up his bigger brothers, steal the bed all for himself, leaving his bigger brothers crying for a warm bed. He would growl and bark loudly at the bigger dogs if he didn't get his way and hog the dog food bowl. He was not the puppy I would have kept from the litter, I would have picked his over sized kinder soft-spoken brother. One has to accept what is given us to find Balance.

I am also not happy to say he tore up about $75.00 worth of Victoria's Secret lacy silky thongs, several good shirts, countless socks and several of my daughter's favorite outfits, typical puppy stuff. We all had to quickly learn that our laundry had to be set carefully in the garage laundry basket so that he wouldn't get to our clothing. Balance takes some adjustment.

One of the biggest issues with Balance was that the dog pees way more than a normal dog should. If he gets overly excited he pees. He has peed when when he ate his special dog food. He used to pee when he got excited when we came home. He would pee if he got to play ball. He would pee if he was let into the house for a bit to play with my daughter. He would pee when he greeted me in the morning. That DAMN DOG PISSED EVERYWHERE. I quickly learned that the dog needed to be quieted down and relaxed before we did anything with him to prevent him from peeing. Balance needs calm.

When we lost him, my daughter cried. She asked me, "Mama, can you please say a prayer to the gods and the goddesses that the dogs come back home?" Now, when your tearful sweet sad little girl asks you to say a prayer to the goddess, you're OBLIGATED. I did some work with a goddess that is known for her associations with dogs and left it at that. Balance can be found with the help of the gods and goddesses.

We kept checking the animal shelters, the Internet and the paper. We kept regular patrol of the neighborhood and asked every neighbor we could about it. One must continue to strive to find Balance.

Today, there was an ad in the paper about a found dog in our area of town. Here is the conversation that transpired:

"Is he a black and white dog?"

I am happy to say that Balance was found and the people who took him in for the week also gave him some free vet care since they work for a pet hospital. This was a BIG RELIEF for me too since I have been concerned about how I would pay for the required puppy immunizations. As before, I will be sure to honor the goddess that helped us find Balance. 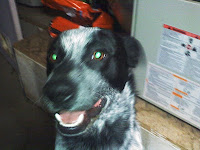 Posted by PhoenixAngel at 11:11 PM

Thanks Frater Robert. I am glad you enjoyed it