The Most Magickal Object In My Home

The most magickal object in my home has been in our family for 19 years. It was found by my late ex mother-in-law during a round of dumpster diving. She gave it as a gift, out of pure Love. My in-laws were poor dust bowl Okies who did their time pulling the long dirty sacks pickin' cotton or pickin' fruits. Earthly possessions were always second hand because money was spent for just surviving.

My family was also poor but we were raised to have more pride in our possessions and anything we couldn't afford to buy new and by the sweat of my father's brow was simply not a necessity. Although I made it a rule never to take or use things from dumpster diving, I was instantly attracted to it and saw it's value. My pride and my ego typically would not be open to things obtained in such a lowly manner ... but the object called to me because I knew it was truly magickal.

I made sure that the object was properly cleansed and purified prior to use. Although it shows wear, it is still as valuable as it originally was and it's power has gained IMMENSE strength over the years. It has required a few repairs, but each time it is lovingly restored. In fact, I can say this object has increased in value so much that is is truly priceless and can never be replaced.

This object is immensely protecting. It is also very powerful for healing and can be very calming. Sometimes, the object can provide the user with great joy and inspiration or drive away fear and loneliness. At times, it can be provide the bearer with strength and sometimes clarity. It definitely provides the bearer with restful sleep and pleasant dreams. It has also been known to fend off demons.

What, perchance, is this intensely powerful and utterly priceless magickal object? 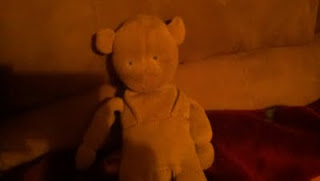 This is "Baby". He was given as a gift from my mother-in-law to my son when he was a baby. My son kept Baby several years and he lovingly passed it on to my daughter. Baby has been through a number of immunizations, trips to the doctor/dentist, and countless illnesses. The doll has provided comfort from separation anxiety, given companionship during bouts of groundings, provided backup against the evil warriors in spontaneous Power Ranger battles and has attended several tea parties. Baby has been camping, local parks, several museums (even our personal family favorite, the Rosicrucian in San Jose), national/state parks and around the world. He was there for homework, listened to 100s of books and a number of movies, present for every type of childhood lesson. The doll has been through 6-8 different puppies without ever being chewed on or ripped apart. Baby was also there to provide much needed comfort, solace and protection during the multitude of screaming battles, my ex and I used to have.

Baby is no longer magickal, it is now become enchanted. Sometimes, when the house is quiet, I am almost certain the doll talks to me. Maybe I am a little crazy in that regard. But let me ask you this, Dear Reader, after years of that much energy work, can you as a magician deny it's magickal power?
Posted by PhoenixAngel at 12:22 AM

thank you for this wonderful and very lovely post. :)

You are dead on the money as far as I am concerned. Certainly not crazy - I am sure Baby has much magical power. My favourite 'toy' bunny, Pooyan, has similar power and life. A former partner swore she could feel his heart chakra :) After so much love, and energy directed at them, these creatures become real after a fashion - as per the Velveteen Rabbit story.

I hope Baby remains with your family for many more love filled years :)

Thanks for your comment Peregrin. I am glad you feel the same way and you have had a similar experience with an enchanted item. Yes, this doll will remain in our family for a long time. :)

Totally plausible and fairly likely. From most models you're putting so much into dolls all the time. There is actually a known history/pattern/whatever of haunted dolls, and I think it's people building up magickal energy/belief/consciousness in the doll, either to 'become' something or it works as a good home for a wandering entity because of it.