Pantheacon 2012 and An Homage to A New Friend 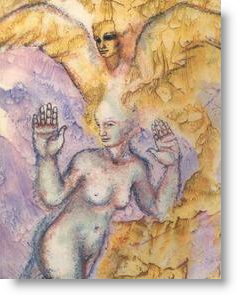 (I love this image... I hope my new friend does not mind me using it)

This year's PantheaCon was a very good one for me, as a ceremonial magician, partly because there were several offerings for CMs, including several from Chic and Tabatha Cicero. It was a little different for me than other PantheaCons because for the most part, I felt like I was taking a very courageous initiative to show up, despite not being with my former CM group. My Dear Readers have known about my family struggles but I have mentioned only a little about being ostracized in the local community. It has been very bad, to the point where my child has been excluded from several pagan oriented functions. It was very difficult for me to explain to my child that the community was an accepting and loving group but on the other side of the coin she was being excluded because of what I believed to be "my sins". I found myself, AGAIN, having to deal with that whole GUILT ISSUE. Damn! will my catholic upbringing continue to haunt me for the rest of my Life? (Also, I am finding that "being ostracized" is as much of a rite of passage as some of the initiation rite themselves so I find myself in good company). I did not care about what others were saying or feeling about me. I am staying on my path.

Before PantheaCon, I was having a bit of a problem with the idea of "staying with one current of energy", that whole egregore thing. I have been thinking about the idea a great deal. What I have been struggling with is the idea that if you do not stay with one system, you really cannot truly master "it" and as a true Leo, loyalty is very important to me. Frater HB helped me out with this when he said, "There are so few ceremonial magicians, you really have to get what you can."


"A musician must make music, an artist must paint,
a poet must write - if he is ultimately to be at peace with himself.
What one can be, one must be."
~ Abraham Maslow
The most empowering part of PantheaCon for me was when Chic Cicero shared his thoughts and experiences with the Golden Dawn and the Ordo Templi Orientis. It provided me with a lot of hope, something I desperately needed. On a side note, as he spoke of certain temples, my mind went into overdrive with visualizations of engineering drawings and schematics. I felt it was a very good sign because I cannot think of any other speakers that trigger that type of visualization, outside of my profession. I was so impressed with their presence that I introduced politely introduced myself to them in the conference elevator: "Mr. and Mrs Cicero. It is a pleasure to meet you. My name is (my real first name".

I already posted about the controversial Dianic ritual. I think the issue will continue to be debated in the blogging community. As for me, I have already blogged on my feelings of the issue. Like Forrest Gump has said: "That's all I have to say about that". I chose instead to attend another woman oriented rite, the Sisters of Seshat ritual. The "Magia Femina" has been an interest of mine. The rite didn't have the bold "in your face" type energy like the Dianic rite. It was more demure, yet intellectual, very much like the goddess Seshat.  As with other ceremonial magick traditions, there is still the problem of accessibility for me. Geography and access to resources continues to be, as it has always been, an issue for me. In my world, my genitals have never been much of a restriction to the information I need.

On a lighter note, it was great to connect with friends and make new ones. It was not all learning for me. I had a really good time. I partied, shopped, relaxed and I drank way more than I expected to. Butterscotch rum (160 proof) totally rocks!!!
Posted by PhoenixAngel at 9:29 PM

Seshat sounds like a great goddess for engineers -- who could argue with sacred practical geometry?

I loved the Cicero's classes! Amazing experience. Got all my books signed, too :) -Fr. ACM