Today, when you're eating your BBQ and watching fireworks, remember that July 4th is the day that a bunch of really cool statesmen got together and signed a document that defined our country.

Besides, ain't it really cool that Hecate is one of our national images?

There is stronger argument that Lady Liberty is the depiction of the Roman goddess of freedom, Libertas. IMHO, I feel that Lady Liberty, like any other deities depicted within the heavily-Christian influenced culture of the United States, is also influenced by other representations of deity, in this case Hecate. After all, the depictions of the Virgin Mary are also depictions of the various pagan goddesses?
Libertas is commonly associated with the pileus, which is a cap that was placed upon a slave's head upon liberation or a felted sailor's cap. Libertas is depicted as sometimes holding the cap in the right hand. In the following coin, Libertas is represented with a crowned head with no rays, a sacrificial jug and a rod:


The rod was used in a ceremony for the declaration of freeing a slave, or Manumissio vindicta, Latin for "Freedom by the Rod". The master brought his slave before a Roman official, and stated the reasons for the liberation. The Roman official would then lay a rod upon the head of the slave and made a formal declaration of freedom of the slave (aside, sounds like another rite).

In the statue, Lady Liberty is wearing a crown of seven rays and holding a torch in her right hand and a tabula ansata (a tablet evoking law) in her left arm with a broken chain at her feet. The tabula ansata in her left arm is inscribed with the date of the signing of the Declaration of Independence, July 4, 1776. She sits at a crossroads on her own island, Liberty Island and near the significant Ellis Island (the gateway to many US immigrants).  Her torch is representative of enlightenment. The seven rays in her crown are said to be representative of the seven seas and seven continents.

In the statue, there is no rod, jug or cap, like with other depictions of Libertas. I think that Lady Liberty's torch, crown and placement at a crossroads are definitely Hecate associated attributions. 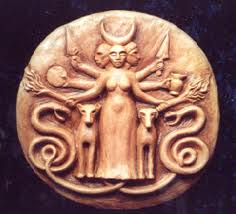 Hecate's torch is symbolic of enlightenment and the death of ego and she is a goddess associated with crossroads. The replacement of the Libertas' slave cap with a Hecate-like torch in Lady Liberty's right hand is a symbolic replacement of the notion that the choice at a crossroads was not a choice made by a "master" on behalf of a servant but a choice made consciously and independently by an immigrant for new beginnings, rebirth and reformation. This conscious and independent decision is very triple goddess in nature to me in that it really sums up the maiden, mother and crone idea. Additionally, the replacement of the rod with the tabula ansata on Lady Liberty's left side, the left side being the seat of logic and reason, is significant of the replacement of the Libertas-associated "Freedom by the Rod" made by an owner and an official on behalf of a slave with a declaration made by a group of independent statesmen by their own authority and set forth by law written into the Declaration of Independence. The rod is typically a tool of force and the tabula ansata is a manuscript of choice.

I think Lady Liberty's seven-rayed crown is a reference to her mention the Orphic Hymn to Museaus:


In the documentation for the Statue of Liberty, the rays of her crown are representative of the seven continents (earthly) and the seven seas (wat'ry). I do believe that the association to the seven ancient planets (celestial) have been left out of that documentation though the implication is definitely there.

I think Emma Lazarus summed it all up in her sonnet, engraved and mounted at the Statue of Liberty:

"Not like the brazen giant of Greek fame,
With conquering limbs astride from land to land;
Here at our sea-washed, sunset gates shall stand
A mighty woman with a torch, whose flame
Is the imprisoned lightning, and her name
Mother of Exiles. From her beacon-hand
Glows world-wide welcome; her mild eyes command
The air-bridged harbor that twin cities frame.
"Keep, ancient lands, your storied pomp!" cries she
With silent lips. "Give me your tired, your poor,
Your huddled masses yearning to breathe free,
The wretched refuse of your teeming shore.
Send these, the homeless, tempest-tossed to me,
I lift my lamp beside the golden door!"

The sonnet of The New Colossus is an analogy of Hecate's role in the Myth of Persephone. Libertas was Roman, not Greek and the "brazen giant of Greek fame is a reference to Helios, which is associated to Hecate in the myth, not Libertas.  The "imprisoned lightening" is the reference to Hecate's father, Zeus and the request by Zeus to Hecate to find Persephone. The reference to the Mother of Exiles, is symbolic of the previously mentioned triplicity of maiden/mother/crone of Hecate and new beginning/rebirth/reformation of an immigrant. The "ancient lands" is an analogy of an immigrant's former country as the Underworld. The storied pomp is Hades. The phrase "yearning to break free" is a reference to Persephone and the lamp is symbolic of Hecate's role in the Myth of Persephone.

With Respect and Love, I owe the inspiration of this discourse to a Facebook entry and the discussion that followed from two of my most respected Frateres, my Beloved Frater and Frater ED.

Posted by PhoenixAngel at 7:11 PM

I'm going to politely disagree on this, for several reasons.

At the time when the Statue of Liberty was made, I doubt Hecate would have been the goddess on anyone's mind; Libertas was already the popular symbol of democracy in several countries, especially France. French revolutionaries actually replaced several statues of the Virgin Mary in the Notre Dame with statues of Libertas for a time. And of course, it was the French Republic who actually gave us the Statue of Liberty.

In ancient Rome, Liberty's statue on Aventine Hill actually resembled Sol Invictus, with his rayed crown. (Helios also shared this accessory, as did his Colossus.) That's pretty much where our statue gets her tiara from, as far as I understand. The only other goddess I know of with the title of "Libera" was Ariadne (her husband, Dionysus, being "Liber"), and it's not like our statue is carrying a thyrsus. But anyway, our national personification, Columbia, is normally shown in a liberty cap, so I think the source of inspiration is pretty clear. It's never really been under dispute.

There is the whole earth/sea/sky thing to consider, as well as the torch - that's a fair argument. But on the whole, Hecate is a lunar goddess rather than a solar one, and the above evidence seems to point to Liberty being on the solar side. In the absence of other symbols of Hecate, I think it's safe to interpret Liberty's torch as being the light of day. (Think of the logo for Columbia Pictures. Looks like the dawn, right?) The Colossus stood above the ocean as well, straddling a busy port to show dominion over land and sea. Again, I think this is the likelier inspiration/reference. Just my 2 cents.

Though I could not find a basis for it, I believe the broken chains at Lady Liberty's feet is also an analogy for the snakes at Hecate's feet in the sculpture...Who knows?

Soror VVF: Your comments are duly noted and taken. I did have major problems with the reconciling the ideas that Hecate is indeed a lunar diety and the reference to Libertas/France. In the sonnet, Lady Liberty is compared to Helios and his Colossus, which I feel was more of a analogy to Hecate in the Persephone Myth, rather than Libertas. Perhaps, the author of the sonnet tried to allude to the myth?