Lately, my magickal friends have complained about trolls, which are people who deliberately post messages to a message board (or FB posts) in order to incite a disruption, argument or some other mal-intention. You can find a good description of a troll in the Urban Dictionary, as well as a funny, albeit painful, video. I have noticed many message boards now contain descriptions about the group with warnings against trolling. The Urban Dictionary references the original source of the concept of a troll, which were mythological creatures. The online source also talks about another type of a troll, a Japanese troll called an Oni. When my Leo Son and my Jupiter Angel were small I used to read them two childrens' books with trolls, The Three Billy Goats Gruff and The Funny Little Woman. They loved those books. Whenever I read about the online trolls, I cannot help but think of these two stories.

The billy goats remind me of Baphomet and the Funny Little Woman reminds me of Persephone. The main characters deal with trolls and crossing bodies of water. Both endings have the main characters finding their prosperity, despite their dealings with the trolls.


The two stories are good allegories of the difference between a mystic and a magician. The distinction between the two kinda alluded me for a while, because, once again, I have to bring things back into my mundane world to actually relate to them. I found a definition in a qabala book  and it told me the difference between the two is that a mystic finds the world as fundamentally flawed and tries to rise above it, whereas a magician sees these flaws, continues to try to work within the flawed context and makes the best of it. It is interesting to note that the goats are in a bridge over the troll but yet the Funny Little Woman takes her  journey into the depths of the earth. Both perspectives can be used within the context of the qabala. I am still not sure if the definition is correct, however I still see value in the different perspective, whatever they may be called or associated to.

I do not think one way is better than the other at dealing with the issues of the world and our own humanity. I think it really depends on the person, place or time.


If you're like me, you still enjoy a good fairy tale so I have included both for your reading pleasure. The Three Billy Goats Gruff follows and The Funny Little Woman can be found by clicking on the link below. The billy goat fairy tale is the Norwegian version, which is also the one I used to read to my Leo Son and Jupiter Angel. I linked up the Funny Little Woman so you can enjoy the wonderful artwork too.
Once upon a time there were three billy goats, who were to go up to the hillside to make themselves fat, and the name of all three was "Gruff." On the way up was a bridge over a cascading stream they had to cross; and under the bridge lived a great ugly troll , with eyes as big as saucers, and a nose as long as a poker. So first of all came the youngest Billy Goat Gruff to cross the bridge.

But just then up came the big Billy Goat Gruff .
Trip, trap, trip, trap, trip, trap! went the bridge, for the billy goat was so heavy that the bridge creaked and groaned under him.
"Who's that tramping over my bridge?" roared the troll.
"It's I! The big Billy Goat Gruff ," said the billy goat, who had an ugly hoarse voice of his own.
"Now I 'm coming to gobble you up," roared the troll. Well, come along! I've got two spears, And I'll poke your eyeballs out at your ears; I've got besides two curling-stones, And I'll crush you to bits, body and bones.

That was what the big billy goat said. And then he flew at the troll, and poked his eyes out with his horns, and crushed him to bits, body and bones, and tossed him out into the cascade, and after that he went up to the hillside. There the billy goats got so fat they were scarcely able to walk home again. And if the fat hasn't fallen off them, why, they're still fat; and so, 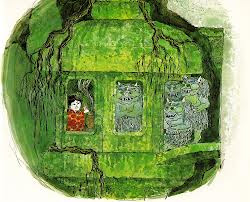 Posted by PhoenixAngel at 1:54 PM