The Khunrath and Kubler Ross

"Without divine inspiration, Man is never able to be full or complete, or reach great achievement."
- Translation by Beloved Frater of Inscription in Alchemist's Laboratory, by Khunrath

The Kübler-Ross model, commonly referred to as the "five stages of grief", is a hypothesis introduced by Elisabeth Kübler-Ross .When a person is faced with the reality of impending death or other extreme, awful fate, he or she will experience a series of emotional stages: denial, anger, bargaining, depression and acceptance.

At age 16 when my dad passed, I read her book at the urging of the people in my meditation group. The book, the concept and the understanding of the process has helped me validate my growth over the years, especially with my spiritual growth.


Denial
Dualism works to a point because we need to redefine and describe our world. Perspective can lead to a single point but the view is still seen with two eyes, which can mislead us to think the windows to the soul are dual. Our soul does not desire duality. Our soul desires to be complete, which I think can only be accomplished after we realize the two halves are complementary parts of the whole.


Anger
What led me to make this statement was a FB post about a boy, who was putting together an object for his mama and a subsequent comment about the child doing what "good men" are supposed to do. Though I understood the intentions of the remark, it made me wonder how the idea has been so different for me. I have a man's profession and I have been the bread winner of my household, like a man. I tinker around the house in a manner that is typically reserved for men. So does that make me a "good man" and therefore a "bad woman"? I think defining our world according to what is supposed to be either male or female and attaching qualitative descriptions, like "good" or "bad", puts us on a slippery slope, especially since the roles and characteristics of the sexes are blurred. But like the well-intentioned commenter posting praises of the little boy putting together an object with tools for his mama like a "good man", we do it unconsciously because of the manner in which we were programmed as children and our physical limitations.

Bargaining
When we accept the limitations of our bodies and allow those restrictions to define us, these dogmas affect the way we go about our spiritual path, I met one guy, straight as an arrow, who likes to cross dress for rituals. When I first saw him dress in such a manner, he was totally believable, and beautiful. My opinion of his cross dressing was that he was being bold enough to put himself into that magickal mode where he was expressing the darker or hidden parts of his personality, totally accepting the dualism of himself, kinda like Hermaphroditus. This belief goes along with the whole manner in which I have conducted my life, "if I learn to cook really well, that will make me feel more like a woman" or "if I put on dresses more, that will make me more feminine" or "if I learn to craft or sew, that will make me more accepting to the other ladies"..but as I have learned, change is only change and a difference in manner, style, attitude or language is not necessarily a potion for growth. We carry that naive, awkward and clumsy teenager (yet curious and sometimes reckless), where ever we go, and no amount of outward change will ever change what is under the surface.

Depression
Another experience what has led me to think about dualism, is again the window allusion I mentioned at the beginning and my own struggles with seeing. People see through their two eyes, which are like two picture windows to the world, enlightening yet very limited. I do not have that perspective. Most people do not know, for all intents and purposes, I am blind in one eye. If I close the seeing eye, I can see through that eye but when both windows, or eyes, are open, my brain shuts off the blind eye. It causes me great problems with my depth perception but luckily over the years, I have learned to overcompensate, partly because of my formal training as both a hand-draw and software draftsman. (Again, it's the 'bargaining' I described earlier,"if I learn many ways to perceive and draw things, I can therefore change my sight"). Many years ago, a kindly old eye doctor, explained to me about the way normal people see and how I see. I only really see half the picture. The following picture is an exaggeration of how people see the world with their two eyes, still limited but more broader view than mine. It's always been a real bum-kicker for me since I have felt no matter how much I see and no matter how much I experience, I will only really see half the picture. 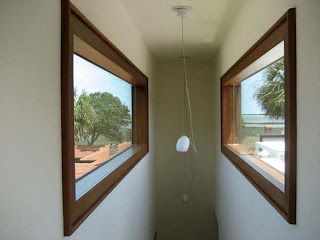 So when Frater RA posted the following picture, I was able to relate to the image immediately. (Frater RA is a lovely man, very wise and insightful and I dubbed him "RA" because the name reminds me of the Egyptian Sun God. I foresee more inspiration from him in the future)

The Khunrath is a good example of how I perceive the world. The drawing is an example of an artistic technique called perspective, which is a technique where the artist draws a point (or more), draws the associated angles to that point and fills in the rest of the drawing according to the lines and the point. This technique gives the drawing that 3 dimensional feel to it. My understanding of perspective is really, the only way I can drive through the mountainous regions near my home (the Tejon Pass) when the Sun is down, my eyes are strained and clouded with tears of emotion and my depth perspective is greatly diminished, . I have to simply focus on a single set of tail lights in the distance.


I first wish to draw your attention to the largest, most comprehensive symbol of this mandala like glyph. Which is to say the entire glyph itself. The combination of circle and central point, makes the astrological symbol of the Sun! The Great Work can be thought of as a series of practices aimed at changing the ordinary human aura into a second shining, golden body. A spiritual or Solar Body. The place from where this Light is summoned, the center, is a bedroom... The key to this strange symbolism is the saying placed above the bedroom's door : "Whilst sleeping, keep vigilant." This means we must cultivate that middle world, between sleep and wakefulness. You know the feeling of falling asleep. Well, the trick here is to learn how to fall only half way! You have struck the center and bright beginning of the Solar Work when you neither [awake or asleep], but remain aware in this middle world of Soul, of the second body.

His interpretation was synchronous to my latest spiritual developments of having dreams of the Work when I sleep and during the time directly after rising, I get visions.

Acceptance
Frater's RA's insight was a divine inspiration to me because it helped me realize that my physical limitations and societal imposed restrictions will not inhibit my spiritual growth and progress. The two halves does not make me full or complete. It was okay to see the world through one window. It was okay to sometimes be blinded by emotions of sadness... or denial, anger, bargaining or depression.

As long as I focus on a source of the Light, I will still find my way.


A dreamer is one who can only find his way by moonlight, and his punishment is that he sees the dawn before the rest of the world. -Oscar Wilde

QED
Posted by PhoenixAngel at 11:33 PM

Post Script, A quote that brings it all together.

“People are like stained-glass windows. They sparkle and shine when the sun is out, but when the darkness sets in their true beauty is revealed only if there is light from within.” ~Elisabeth Kübler-Ross