The Gate of Jupiter

A good friend of mine gave me this image. She said it reminded her of me. With Jupiter in the background and several other objects in the picture, I am inclined to agree with her. 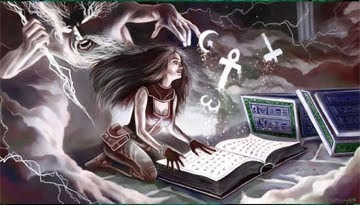 Until just recently, I have not been able to write about a group that I have been in. I alluded to my Work several months back when I began writing about my Jupiter angel (Jupiter Angel posts 1 and 2), my sweet daughter. I didn't write about it because it just wasn't time yet. I am not a name dropper (well, except for the coolio Rock Star Holy Man and the reference below) and would rather have people respect me for my work, not for who I know.

The work is done solitary, but simultaneously with a group according to the planetary hour and day, specifically the planetary influence of Jupiter. The group is called the Gentlemen for Jupiter, which includes a set of very distinguished, scholarly, experienced, and well-respected occultists. I am very proud to be in the group.

From the very beginning, I was intrigued because I felt the Work would provide a nice setting and experience with my future intentions to work with Goddess Sister. It has...no doubts about it. I came upon the work about April, the same time period I began my extensive research on the Goddess Sister. Unlike other groups, there are no intentions to teach and no issues with initiation, only the intentions to honor deity. I liked that. My family roots are deep set in the traditions of honoring our deities and ancestors so in a way, the work seemed very natural to me. I also liked that the group is very respectful towards Christianity. My beloved mom and most of my blood family are Catholics and it hurts me to read about so much Christian-bashing (except fundies).

Jupiter (Zeus) is an interesting force to deal with, in that, the deity is both a god and a planetary influence. Both basic attributes come into play in the Work. Jupiter is the god of thunder and lightning and the planetary influence has the attribute of expansiveness to it. Since my Life was very much in transition, I felt the Work would provide me a means to rebuild and grow my "Kingdom". What I did not anticipate was the amount of cleansing and purification that would come about. It has been both tumultuous and empowering. The means for expansion was only really provided when I began to figure out the parts of my Life that required cleansing, lots and lots of water, like the rain from a flooding storm.

Within the last 4 months, I can say that many blessings have been bestowed upon me, the greatest of which I will call "resources". When the ruler of a Kingdom is building. she/he takes advantage of the greatest resources within their region. A good ruler also learns their talents, best advisers and loyal allies. After the storm has flooded the region and rebuilding must commence, you first set the lines for your foundation. Then you lay your cornerstones, build your foundation and build your Kingdom. The Work has provided me with the cornerstones and the building materials. I have to admit, I have been very surprised and taken aback with my resources because in some situations, it has NOT been what I expected it to be. The cleansing had alot to do with that. You know that trippy little epiphany of sight after cleaning your glasses of all of the filth? Well, it's sorta like that.

I will not go into great detail about the Work. The rite is done in accordance with Frater Rufus Opus', Gate of Jupiter. The man is respected worldwide. From my own personal experience, I will say he is indeed a scholar, a truly experienced magician and a wonderful writer.

Posted by PhoenixAngel at 7:20 PM

Not a member of the group, but I have purchased and gone through the Gate series on my own. It is indeed very powerful stuff. I intend to ask Frater R.O. at some point on how best to keep it up on an on-going basis.

Yes, RO's Gate of Jupiter is truly powerful. Thanks for your comment.